The Giza Plateau is one of the most spectacular and mysterious places on Earth. There we can find the Great Sphinx and the ancient construction that attracted researchers since its discovery and to these days no one has been able to date its origin.

According to two Ukrainian scientists, the Sphinx is more than 800,000 years old.

These two scientists, Manichev Vjacheslav and Alexander Parkhomenko, tried to overcome the Orthodox interpretation of Egyptology. However, the problem and difficulty of dating the construction of the Great Sphinx still exist, however, new scientific methods and new geological approaches make the task less difficult.

These two scientists claim that water from the great lakes played an important role in the formation of depressions. The similarity of the erosion forms and the geological structure of the sedimentary rock suggest that the destruction of the structure was due to the energy of the waves. 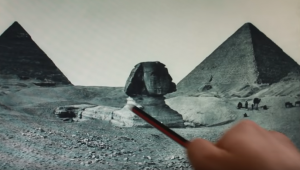 Geological literature confirms the existence of scattered lakes in the areas bordering the Nile, and this could explain the erosion of the Sphinx. However, the existence of these lakes dates back to the Pleistocene. Does that mean that the Great Sphinx already existed back then?

Please watch the full video, and you will understand all this information much better.

“The water erosion hypothesis of the Sphinx argues that the main type of weathering evident on the walls of the Great Sphinx enclosure was caused by prolonged and extensive rainfall  which would have been prior to the time of Djedefre and Chefren , the pharaohs credited by most modern Egyptologists with the construction of the Great Sphinx and Second Pyramid at Giza around 2500 BC. Egyptologists, geologists and others have rejected the water erosion hypothesis and the idea of an older Sphinx, offering various alternative explanations for the cause and date of the erosion .. ..

Recent studies by German climatologists Rudolph Kuper and Stefan Kröpelin of the University of Cologne suggest that the change from a humid climate to a much drier one may have ended around 3500 – 1500 BC, which is up to 500 years later than is thought. currently . Egyptologist Mark Lehner believes this climate change may have been responsible for the strong weathering found on the Sphinx and other 4th Dynasty sites. After studying sediment samples in the Nile Valley, Judith Bunbury, a geologist at the University of Cambridge, concluded that climate change in the Giza region may have started in the early Old Kingdom, with desert sands arriving in effect at the end of the era