Now I know this happened a while ago, and it’s not the news, but it is one of my favorite metal detection stories. I have not included it in the news section because it is an older story. But I love it because my boy is almost in the age where he will be able to come with me into the fields and out to the beaches to “treasure hunt” and the perfect dad & son time.

James Hyatt, 3 years old, defined the term “beginner’s happiness” when he struck gold. Just minutes from using his very first metal detector, he found a gold bracket. This gold item is said to be worth somewhere between 2.5 and 4 million dollars.

James Hyatt was only 3 years old when he picked up a metal detector for the first time … and revealed a 16th century reliquary worth £ 2.5 million! The gold box used to hold religious relics was found buried just 8 inches below the surface. 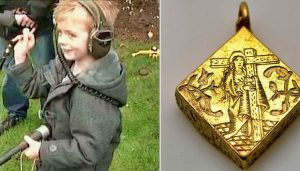 James, 3, was out on the first treasure hunt of his life.

After only a few minutes he made a dream find.

Two decimeters down in the ground was a gold box – worth almost 4 million.

You might call it a beginner’s trip, but James Hyatt himself would not understand the meaning of the term.

Last May, the three-year-old was out with his dad and grandfather on a field in Essex outside London. They have the habit of occasionally going out on a treasure hunt together.

“Map only has pirates”

To help when looking, they have metal detectors. Now James had to try one of the appliances for the first time.

And it whistled almost immediately. They dug, and two inches down they found an object of metal. It turned out to be a small shrine – in pure gold.

– I held the device and it sounded “beep beep beep”! Then we dug, and there was gold there. We had no map, it only has pirates, James Hyatt tells the Daily Mail.

Experts dated the casket to the 16th century. When used, it probably contained a relic. Probably the shrine belonged to someone in the British royal house.

The money goes to the children

The shrine is estimated to be worth an incredible 2.5 million pounds.

– James came to himself when he realized he had found a real treasure. I was completely overwhelmed, says dad Jason Hyatt.

The law gives the Hyatt family the right to share the profits of the shrine with the landowner. They now hope to sell the gold item to the British Museum or any other institution.

– I’ve been doing this for 15 years as a hobby but never found anything like it. If we get some money they go to our two children, says Jason Hyatt.

There was much speculation that the relic might be worth millions, but was actually acquired by the British Museum for £ 70,000 and shared between James and the landowner. The cover is displayed in the British Museum’s Medieval Europe Gallery.

I’ve been trying to look a little further at why there was so much speculation that the lid is potentially worth millions and then actually only sells for thousands, but the information is very vague. Is this another case of BM valuation findings well below their value?

I’m not sure, but still, it’s a fantastic story and an incredible discovery. Well done James for discovering such an important rare story!