The photo of Mars, taken by the Mast Camera on the Curiosity Rover, has sent the internet into a frenzy. Some people are convinced that they have spotted a secret doorway built by aliens in the image.

While it’s certainly possible that there is something hidden in the photo, it’s more likely that what people are seeing is simply an optical illusion. The brain is very good at seeing patterns and shapes, even when they’re not really there.

So, while the photo of Mars may not be proof of aliens, it’s still pretty cool. And who knows, maybe there is something hidden in the image that we just can’t see yet. Only time will tell!

A recent picture from Nasa’s Curiosity Mars rover has sparked an interesting conversation on the internet. The picture shows a feature on the Martian landscape which looks very much like a doorway. This has led to speculation about what might be behind the door, with some suggesting that there could be little men on Mars. 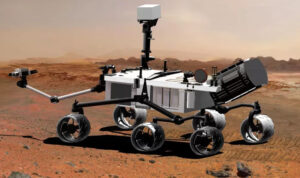 NASA said the image was taken on May 7

The original image, which was taken on May 7 at a geological feature known as Greenheugh Pediment, showed a small niche in the rock face. However, when UFO of Interest looked at the image in the context of the whole mosaic, they could see that the niche was just one of many erosive features on the rock face.

There are other blocks, fractures, shapes and other erosive features all over that rock face, which means that the ‘doorway’ is most likely just a trick of the light.

So if you’re ever on the lookout for signs of intelligent life on Mars, don’t waste your time looking for doorways in rocks – there’s probably nothing behind them!

Upon first inspection, it may appear that the raw image

(https://mars.nasa.gov/raw_images/1064629/) is of an entrance to a secret underground tunnel. However, upon closer inspection and when contextualized within the larger mosaic, it becomes clear that this is simply a rock face with various erosive features. The “entrance” is actually just a small niche in the rock, surrounded by other blocks, fractures, and shapes. While it is certainly possible that there are tunnels and caves on Mars, this particular image does not provide any evidence of their existence.

The original source of the raw image is the National Space Science Data Center. The above-mentioned raw image is of great interest to the scientific community because it provides important information about the geological history of Mars. The data from this raw image will help scientists to better understand the processes that have shaped Mars over time.

In a recent article, Scott C Waring discusses his belief that the ‘tomb doorway’ he has spotted on Mars is only a foot tall and used by ‘eight-inch aliens’.

Waring argues that the entrance bears a strong resemblance to typical Egyptian tomb entrances, and suggests that the aliens may have been inspired by Earth’s ancient cultures. However, there is no evidence to support this claim, and it seems more likely that the resemblance is simply a coincidence.

If aliens did visit Mars in the distant past, it is unlikely that they would have left behind such a small and unremarkable structure. It is more likely that the ‘tomb doorway’ is simply a natural formation with no connection to extraterrestrial life.

A self-professed UFO expert has claimed to have found a “tomb entrance” on the surface of Mars – similar to those built by Egyptian pharaohs. Scott C. Waring took to his YouTube channel for UFO Sightings Daily to share what he believes is “100% proof that alien life once lived on Mars”.

In the video, he analyses the footage and compares the one-foot-tall doorway to Rameses’ tomb in Ancient Egypt – and sensationally believes they are for 8-inch tall creatures he believes he has spotted on the Red Planet previously. While it is impossible to verify Mr. Waring’s claims, his video has nevertheless garnered a great deal of attention, with many people eager to learn more about his alleged discoveries on Mars.