The first UFO pictures – Attention, photos from the CIA library

The first UFO pictures Published in Folkvett no. 1/2003.

Roger Skoog. If the UFO is really there, there should be a lot of photographs even from the time before 1947. The camera’s massive entry into the public in the mid-1920s should reasonably have produced UFO photographs in the coming years, but that is not the case.

The reel film photography was presented as a popular, easy-to-handle and fun hobby for anyone as early as 1889. The modern camera Leica made its debut in 1925 and the photography became even easier, with a breakthrough for the photography of the public as a result. From 1925 onwards, there were good technical conditions for being able to photograph UFO objects, but still, it took another 20-25 years before the UFO or flying saucer came into view and became known in its time. Was the UFO myth born with Arnold’s observation? What was the difficulty in photographing the UFO prior to Kenneth Arnold’s famous 1947 observation?

Were there no UFOs at that time, or was it just so simple that people did not think such a thing existed before this event? If so, how important were the media and popular culture to the UFO sightings? One can ask the question of magazines, books, radio and cinema films created something that did not really exist. If there was a UFO before 1947, then you have to explain why the UFOs basically fooled the photographers throughout the first half of the 20th century. What other causes can then be highlighted? Are there any alternative explanations at all, apart from the fact that camera density among ordinary people only increased explosively during the second half of the 20th century? 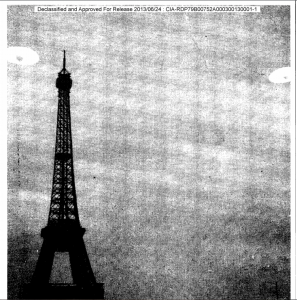 In retrospect, it is now very easy to conclude that the UFOs arose in connection with Arnold’s observation, but such a finding may be premature. To know for sure, you have to research everything. Regardless of this, most of the flying craft before 1947 appears to have appeared only in the science fiction literature (including a saucer in an English novel as early as 1912), as well as on cinema screenplays. In 1947, the general term “flying saucer” came into being, which at that time also included sightings without flying vessels.

You could probably say that Kenneth Arnold’s observation created a phenomenon that previously only existed in popular culture. However, the UFOs themselves should have existed independently of the intrusion of the saucer into the human world. Where are all the plausible images of the UFO from the mid-1920s onwards, when the availability and ease of use of the amateur camera increased? This increase, too, should have yielded an observable result in the form of countless images. There are certainly UFO images from this era, including an image of Edward Pline from 1929 (Ward Sawmill, Slide Ward, Colorado). 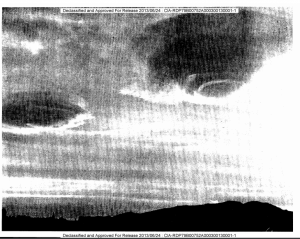 This picture shows something like a saucer, but the object is actually more like physical damage to a negative or photograph than some unknown flying object.1 The few UFO images from the 1920s-40s that still prove to exist and represent various saucers, candles, and other unknown objects should be attributed to low credibility for various reasons. Diffuse or unknown origins, suspected damage to negative, cropped images without pending explanation or a defective caption are a few examples of all the parameters that always diminish the credibility of these types of images.

Photos from the CIA library 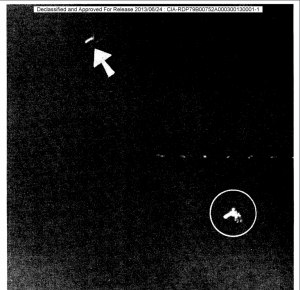