Have you heard the story of how Håkan Nordkvist traveled in time?

Many people have heard it. A week ago, a movie was uploaded on Youtube, where a young Turkish man tells it. It is four minutes long and has only received 22 views, which is less than the almost 300 views a Spaniard received when he published his own version of the story in early July. And not even if you put together these two film clips viewing count, you hit the video that was published in Hindi at the end of January, where an Indian woman reports on Håkan Nordkvist’s experience, which received 1,600 views. 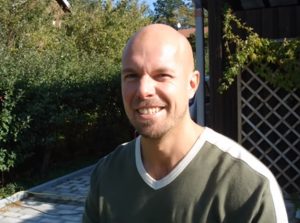 For those of you who couldn’t bear to look at the clip, here comes Håkan’s story in brief: one day a pipe broke in his kitchen, and when he was going to fix it, he discovered that there was a long time behind the pipes, under the sink. He crept forward, and at the other end, he met an older version of himself. Håkan and 72-year-old Håkan recorded a short film cut with the mobile camera, comparing their exact same tattoos. Håkan sounds happy and touched when he talks about the event. It has become a beautiful memory for him.

But for the curious world, those who sometimes find themselves trapped in front of Youtube’s many lists of strange and enigmatic events, the event is a fascinating mystery – and a testament to the fact that time travelers may still exist. In clips after clips, Turks, Spaniards, Indians, and Americans describe how “Hakan Norkd… Nordik… Nordkvist”, along with other people who are caught in seemingly modern clothes or mobile phones in black and white, represent a somewhat eerie shadow side of reality. Could it be for real?

No sorry. It’s a commercial. It was launched in autumn 2006 as a guerrilla advertisement for the pension company AMF Pension, together with, among other things, an advertising campaign where, among other things, you could send in a selfie and get an aged version back. For example, this ad was included in the Skåne edition of Metro on November 25, 2006:

The clip is probably AMF’s most successful commercial ever counted in the number of views but is more interestingly considered the walking tale.

For most people who today tell, or watch, the story of Håkan Nordkvist does not know that it is, in fact, a ten-year-old commercial for a Swedish pension company. They consume it as a legend, something that you can certainly punch holes in, but that is exciting as long as you fail to be source-critical. History has undergone a process of transformation that has often occurred on the Internet: it has, so to speak, been pulled out of the earth without its roots, becoming a legendoid (of legend and –old, “something similar”) with no context disseminated by YouTubers who steal stories from each other.