Hi, good news or not. We have 4k of space. This may be good news, now let’s see if it will even help with this. My personal opinion is that we had to have 8k, 5 years ago from space.

Understand that aliens are now training their feet as we watch them? Are we some kind of Big Brother?

New Earth videos show our planet in amazing high definition. All this is thanks to a recently released 4K video streaming platform.

The Space Exploration Network has founded a transmission platform called Sen, which provides real-time information and images of the planet. One of the goals of this platform is to help global populations deal with the changing climate.

It has six cameras that have been launched into space. Video cameras and a computer system were recently launched by Sen aboard an RSC Energia satellite. Russian company. 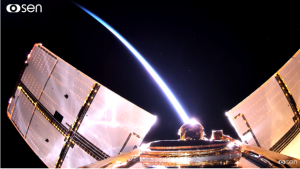 According to Sen’s founder and CEO, Charles Black, everyone is incredibly happy with the results of his first mission, as this took many years to develop this type of technology. Finally, Sen representatives will assist RSC Energia for future video streaming platforms.

This mission proves that this kind of technology really works. We hope more platforms like Sen will come in the future.

NASA has put HD cameras on the international space station ISS. See what we look like!
April 30, High Definition Earth Viewing (HDEV) was activated aboard the ISS. The experiment consists of several very common HD cameras for commercial use, which are located in camera houses with a well-controlled climate where there are the right pressure and temperature. The transmission is completely live!

During the course of the experiment, the Earth is visible from the various cameras. During the switch between cameras, a gray and then the black image is displayed, which is perfectly normal.

As the ISS is in total darkness as it passes around the Earth, the image is completely black at times.

If the ISS has lost contact with the Earth or if for any reason HEDV fails, a gray screen or recording of a previous video stream is displayed.

The experiment is primarily to see what kind of impact space’s harsh radiation environment has on the equipment. The analysis of the video quality will facilitate when photo and video equipment is chosen for future assignments.

Sen has successfully demonstrated the world’s first 4K video since a satellite in 2019, with some featured videos shown here!