The way in which people behave under the influence of alcohol is a completely different version and also a change in their character. But according to a new study, how a person reacts when drunk maybe their “real” version.

A team of researchers from the University of Missouri and Purdue University conducted an experiment with a group of 156 volunteers to discover how alcohol affects behavior.

For the experiment, the volunteers were randomly divided into two groups, one of which received Vodka and Sprite, and the other group received Sprite. 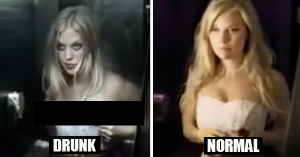 Participants were asked to qualify after completing the task. However, it turns out that there was not much difference between drunk and sober participants.

Rachel Winograd, one of the psychologists working on the project, said she and her team were really surprised to see how intoxicated participants had a very different view and perception of their behavior compared to outdoor observers who thought they were more extroverted and didn’t believe that they were nasty or when they performed their mission.