A disturbing solar storm, large enough to cause a significant disruption in our electronic systems and network systems, occurs on average once every 25 years, researchers have recently discovered.

Solar storms in cycles of 25 years

By analyzing the magnetic field registers at opposite ends of the earth (the UK and Australia), researchers at the University of Warwick and the British Antarctic Survey have been able to detect superstorms that go back over a period of one hundred and fifty years.

The discovery was possible thanks to a new method of analyzing historical data, set by the University of Warwick, of the last 14 solar cycles, well before the space age began in 1957, instead of the five most recent solar cycles currently in use. 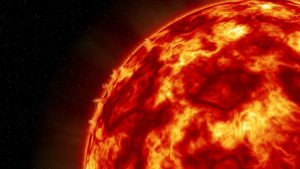 Explosions on the Sun’s surface

Air disturbances, power outages, and northern lights. Storms in the sun can affect everyday life a lot. But what really is a solar storm and how can something so far away have a bearing on life here on earth?

What is a solar storm?

How is the earth affected by solar storms?

Heavy solar storms often occur, but they rarely reach Earth. Around the world, there are several warning centers that follow the activities on the sun’s surface and make forecasts for solar storms so that we can be prepared for the outbreaks.

When a solar storm occurs that is directed toward the earth, charged particles are ejected from its surface. These particles can shatter solar panels on satellites and also disrupt their computers.

Then comes a wave of plasma that compresses the Earth’s magnetic field. It can affect our high voltage lines, which can result in power outages. It can also affect the telecommunications network and the air traffic radar system. Society is becoming more and more dependent on technology from satellites, GPS, mobile phones and other communication systems, therefore increasing the risk that our daily lives are affected by solar storms.

A study published in Nature Communications shows that solar storms could be much more powerful than scientists have so far though. Geology researcher Raimund extreme solar storms ago. These solar storms were so powerful that they had devastating consequences for the earth if they occurred today.

The positive sides of the solar storms

But solar storms can also give rise to more positive phenomena, such as the beautiful northern light. When the solar storm hits the magnetic field that surrounds the Earth, particles accelerate and the air is bombarded by electrons that begin to glow, and then we can see the beautiful spectacle in the night sky.

Previous PostArtifacts of the future that scientists cannot explain: evidence of time TravelNext PostUFO in the form of a triangle filmed on a US aircraft carrier. UU in the Mediterranean Sea – Video with leaks