Since the beginning of time, man has been staring at the stars and wondering if God is there, or at least life on other planets. Finally, we had advanced so far that we could send people to the moon and once and for all find out that there is no life there.

A couple of weeks ago, the US Space Agency Nasa held a press conference, revealing that their craft Curiosity, climbing around Mount Sharp on Mars, found the biological molecule methane. The problem is that this methane is three billion years old. Thus, there may have been living on the red planet, but not even that is certain.

Eric Stempels, a researcher in astronomy and space physics at Uppsala University, commented on the finding in TV4 that it had long been predicted that there would be methane on Mars given that the planet has had large amounts of water. However, methane is not proof that there is or has been living there. 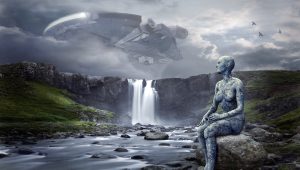 But now the Oxford researchers are coming and smashing all hopes of another intelligent life in the universe.

“By predicting that aliens have undergone major transitions – which is how complexity has arisen in species on earth, we can say that there is a level of predictability to evolution that would cause them to look like us.

Sam Levin, a researcher in Oxford’s Department of Zoology”