Archaeologists have discovered a “scientific treasure” – a giant Mayan cave under the historic ruin city of Chichén Itzá.

The cave is located about 24 meters underground and is filled with hundreds of artifacts and relics, according to Mexican researchers who made the discovery.

– What we found is amazing and totally untouched, says archaeologist Guillermo de Anda, who calls the cave a scientific treasure. 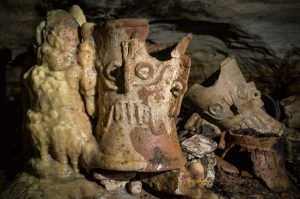 The team of the Spirit has so far explored around 450 meters of the cave. It consists of several different chambers bound together by narrow passages, many so narrow that the researchers have to crawl or pull each other through them. It is still unclear exactly how large the cave system is. 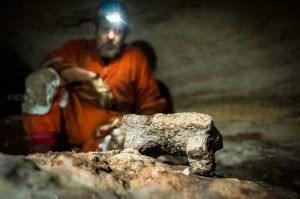 According to the archaeologists, the cave was not completely unknown – scientists should have found it already 50 years ago, but for unknown reasons decided to close the entrance with boulders. Then it fell into oblivion.

As the Spirit and his team of archaeologists prepared to enter the cave, local Mayan Indians warned them that the cave was guarded by a poisonous coral worm. And quite rightly, the team found such a snake, which blocked the entrance for four days. Only after a six-hour “purification ritual” were researchers able to enter the cave system.

Among the hundreds of relics found, there are several incense burners that are believed to have been sacrificed to call for rain.

The Chichén Itzá was founded by Mayan Indians in the Mexican Yucatán Peninsula, just north of the popular destination of Cancún, around the year 750. In the 900s it was invaded by the Guatemalan Itzá people. The city’s heyday ended around 1,400 and the ruins were found in the jungle only in the 19th century. Today, the area is partially restored and has become a popular tourist destination. Chichén Itzá was named one of the world’s seven new wonders in 2007.

The researchers will now continue to explore the cave system. 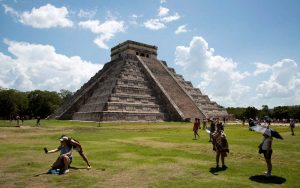 The Mayan Empire extended through northern Central America, from present-day southern Mexico and down through Guatemala, Belize, western Honduras, and El Salvador.

Mayan people (Hua steaks) are believed to have existed in the highlands of Guatemala and Belize more than 4,000 years ago. The earliest known Mayan pottery is dated to 2,500 BC.

The people usually lived in smaller villages, some of which grew into ceremonial centers where architecture, art, and commerce flourished. The Mayan culture was strongly religious and the architecture often magnificent, with considerable temples and pyramids where various types of rites and sacrificial rites for gods were performed. Human sacrifice is also believed to have occurred. Among other things, the sky, sun, and fertility goddesses were worshiped.

The Mayan people cultivated beans, maize, and root vegetables, among others. Cocoa beans were an important commodity, both for food and as a means of payment.

Mayan culture began to decay around the 9th century and many settlements were abandoned and taken into possession of the jungle. The cause of the decay is not entirely clear but is believed to have been a combination of climate change (drought), mutual fighting, misgrowth, and disease. Mayan Indians, however, still remain in the same area today.

When the Spanish conquerors arrived in Central America, the Maya civilization consisted of several rival rulers in the Mexican peninsula in particular. New diseases, misgrowth, and poor defense led the Spaniards to quickly conquer large areas. The Mayan people were Christianized and forced into forced labor.

Large quantities of Mayan Indian print were destroyed by the Spaniards and only fragments of the rich literary treasure are preserved today.

Today, the many Mayan peoples are indigenous people who increasingly work for ethnic, economic, social and political rights.