A 6,000-year-old tomb was discovered in the Saqqara Necropolis in Egypt. Archaeologists also discovered cat mummies and beetles in other burial chambers.

Egyptian archaeologists are preparing to open a tomb of the fifth dynasty of King Userkaf’s untouched pyramid complex. The Necropolis was built more than 2,500 years before Christ, which is not long after the Great Pyramid of Giza.

According to Mohamed Youseff, the entrance to the tomb was completely intact. 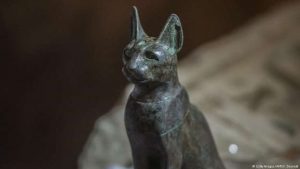 At the same time, many mummified beetles were also found. Note that both cats and beetles were very important religious symbols in the ancient Egyptian religion.

This discovery is very important and very rare, as many wealthy Egyptians were cast to rest in luxurious burial chambers and most of the tombs were laid down and damaged by thieves. 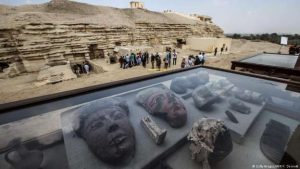 The vault containing the tombs will open soon and could offer many more similar discoveries like this.

Ancient Egyptians believed that the soul could only live on in the realm of death if it were reunited with its original body. And therefore the soul must be able to find and recognize the body. If it could not, the soul was doomed to eternal homelessness. Therefore, for five millennia, the Egyptians developed a unique embalming technique that preserved the dead body forever. The balm worker’s work took 70 days

Day 1: The balm comes
Step one was to wash the corpse and pray for a safe journey to the realm of death.

Day 2–5: The rot is stopped
After washing the body, the balms removed the brain and internal organs so that the body would not start to rot.

Day 5–45: The body is dried
The third step was to dry the corpse using baking soda. Once the balms had removed the organs, they washed the dead man with a mixture of water, date wine and fragrant herbs.

Day 45–55: Human again
After drying, the body was encapsulated in a protective layer of resin.

Day 55-70: The mummy takes shape
After about 65 days it was time to wrap the deceased in linen. The deceased was placed on a special table where doctors could walk freely around the entire body. Large amounts of linen strips were prepared and sized according to size.

Day 70: The journey to the realm of death
The mummy was put in a coffin and handed over to the family.