Now, Nasa claims they are well on their way to finding extraterrestrial life on the planet.

The researcher world scans space to find places with conditions where organisms could exist – and a number of exciting discoveries have been made. Nasa has a number of ongoing projects but now finds that our own solar system is likely to deliver extraterrestrial life.

Opportunity rover was recently pronounced dead, but during its lifetime, the robot has revealed that Mars is a far more active and interesting place than scientists previously thought. Now Nasa says they are well on their way to finding extraterrestrial life on Mars. It claims Jim Bridenstine, who was named the NASA Administrator by President Trump.

Want to explore parts of March
Jim Bridenstine’s goal is for future expeditions to Mars to take samples from the planet’s surface home to Earth.

– We will be able to look at the samples and determine if they contain a biosignature. The goal is to discover life in another world – that’s what we’re trying to achieve, Jim Bridenstine tells the Independent.

Now, Nasa claims they are well on their way to finding extraterrestrial life on the planet.

He notes that a whole series of observations from Mars have shown a high probability that life once existed on the planet – or even still exists. But, for example, have already seen that the building blocks needed to create complex organic molecules are in place, and beneath the surface, there is vital water.

– All in all, these things point to the fact that we have a lot that we need to learn, and my friends – we will do it quickly, says Jim Bridenstine.

comment about Nasa: We will find alien life on Mars 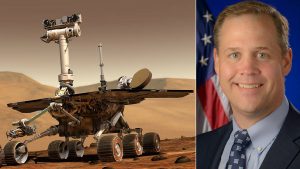 Today we know infinitely more about what even Earth dwellers have for the technological capacity to get out of the SOL system. For at least 50 years, with the support of more advanced ETs, we have been able to build ANTI GRAVITY PROPULSION and we control traffic through so-called. SPACE PORTALS significant in our time zone a very short time to travel from EARTH to MARCH and visit one of the bases we together with other ETs have on this planet.

Yes MARS has oceans only NASA takes the picture in the right place. Later in 2019, President TRUMP is likely planning to form US SPACE FORCE in addition to the other three arms branches. Can we manufacture SPACESHIPS on Earth? Ask to take a study trip to the world’s perhaps most advanced technology company LOCKHEED and you will have to look at seventeen. Vessels large as football pitches without an aversion to aerodynamics and with features in the ship that most of the readers can’t even imagine can imagine what they would be good for. When I read the articles that NT addresses in this issue, I think you hold the suppressed truth on a Kalle Duck level and the readers are forced into completely wrong thought paths.

The technology is undoubtedly implanted for the reason of getting used to a new world, which can be very close both in time and space. I am not seeking polemics with anyone, but I firmly believe that we have now reached a level where these issues must be better reported and of course hope that anyone reading this will be curious! Search ex. Show Corey Goode, Steven M Greer, David Wilcock on Youtube or search for the recently deceased amazing chief designer William Tompkins from just Lockheed, but keep your hand under your chin!