A few days ago, Jessica Meir harvested fresh lettuce grown aboard the International Space Station ISS. Food in space is a much larger area for development and science than one might think at first glance.

How does one keep it?

How do you get the astronauts to like it?

How does one get it to take up as little space as possible?

These are just some of the questions that Vickie L. Kloeris, former ISS Food System Manager at Nasa, can do most about.

The other day you could read that astronaut Jessica Meir harvested and ate salad grown onboard the international space station ISS. Last week, Zero-G-Kitchen Space Oven also arrived at the station as part of an experiment on cooking food in weightlessness, in the package was also cookie dough and even ready-made cookies for the crew. However, both of these examples belong to the unusual.

Daily life at the space station has a much less extravagant menu consisting of dried or semi-dried food in flat portion packages. It is even so that food in space has never been cooked before the weightless oven, and even now the recipe is based on semi-finished products. The dough is baked on the ground.

During the ongoing Quality Fair in Gothenburg, Vickie L. Kloeris was there to tell us more about food in space. She has had the role of Nasa ISS Food System Manager in recent decades, before retiring a little while ago. This means that she has been one of those who developed what astronauts eat, and how they do it, as they travel through space.

So what does an astronaut eat? 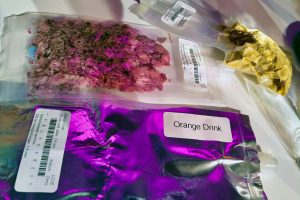 Portion-packed food as it is delivered to the international space station ISS.

The short answer is that astronauts eat the same food we do down on earth. Nasa buys food from regular stores. The difference is that you have to keep the food for a long time and to package it in the right shape, texture, and packaging so that you can easily eat it in weightlessness while taking as little space as possible. The solution for the American astronauts is that their food is dried, antibacterial and packed in special bags. What the astronauts do at the space station is that they add water and thus they resurrect and heat the food before eating it.

An example where the food has changed shape from how it is on the ground, to fit in a weightless environment, is a flavored beverage that is packaged as a powder and then returned to beverage at the space station. Another is salt and pepper, which is packaged in liquid form, as astronauts would otherwise get the whole air full of salt crystals and peppercorns.

– We don’t want the astronauts to get salt in their eyes, says Vickie L. Kloeris.

Certain food is not done with anything except that it is packaged to avoid the risk that, for example, a whole bag of M & M’s takes to the flight and hovers away as soon as someone gets a little sick.

As I said, the special bags apply to the astronauts from Nasa, for example, the Russian cosmonauts get their food packed in canning jars which they heat in a special heat table. This was something that Nasa also did before, but no longer. Space problems rarely have more than one solution. 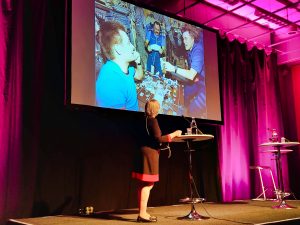 Once you get around the problem of packaging design and heating processes, it remains about how to make the food last for a long time without losing any nutritional value. A key figure today is that the food should stay on the shelf for two years without losing quality. If we are going to Mars, that figure needs to be adjusted to up to seven years. All food to be consumed throughout the mission to Mars must be on board from the beginning and it must maintain the same quality throughout the journey.

– One of the big questions is how we can manage to keep the food for so long without losing nutritional value. Astronauts must be just as functional on the way home from Mars as on the way there, as there is still a lot that can go wrong. We want them to be equally capable of making the right decision should a crisis occur and therefore they must have the right conditions to be able to do so, ”says Vickie L. Kloeris.

But as we all know, use is not always good. Christer Fuglesang says he thought it was a bit sad after a while to just eat freeze-dried and canned food. Then he was up at the space station for a much shorter time (26 days and 17 hours divided into two journeys) than, for example, Jessica Meir will not be expected until April next year after about 6 months in space. Vickie L. Kloeris says that if you, as an astronaut, have to be up for a longer period, you actually have to choose some of the food you want to eat. You can put together your own box of favorites no one else can touch, as long as you do not share them of course. She says that food does a lot for a person’s mental well-being and it is also an important aspect to take into account when planning food in space. Imagine what it would be like not to see or eat a single fresh vegetable for six months, no wonder then that Jessica Meir enjoys every bite of her own little salad leaf.