The glitch in the Matrix

One of our followers sent us a fantastic message. What he told us was so eye-catching that we decided to share it with you.

According to this person, he drove home from work when he decided to take another route. The sun was about to go down and he was enjoying the beautiful scenery when he saw a huge airplane fly 200 meters above the ground.

He was quite impressed with how low the aircraft was because there was no runway nearby.

He suddenly noticed that the plane was not moving. He pulled forward and looked again. It was really like suspended in the air. He identified the planet as a green army jet. 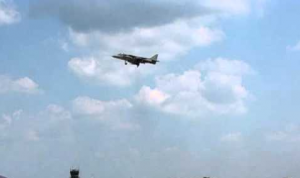 He watched it for at least three minutes and the pitch continued to hang in the air. He decided to leave the place and go home. When he started the car and looked back, the plane was no longer there. 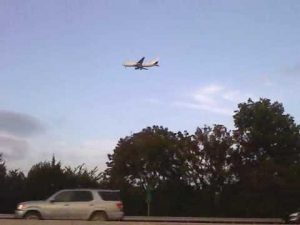 Was it a glitch? Evidence like this is becoming more common. Can there be a bug in the Matrix?

I was at HWY 518 East in Seattle when this aircraft caught our attention. It initially looked like it landed on the highway and not at the airport on the right.

I started recording just like the cleared highway. You can expect the landing plane to move at high speed in the opposite direction for our vehicle. Instead, it seems to be hanging in the air and it is a reference to the crossing that makes it look like it never moves at all.

NO, it’s not a trick … NO, it’s not connected to a post… No, I have no scientific answer for you, but this guy does it!

Analysis of the Youtube clip “GLITCH IN THE MATRIX! Plane suspended in the air” with the calculation of the size conditions, motion, and speed.
Previous title: Planes hovering over a bridge – Analysis of “Glitch in the matrix! Plane hanging in the air”

“Just an optical illusion. Put a C17 look as if it is stationary in the air. If you drive, it seems to be standing still. As soon as you stop driving, the plane will look like it is flying slowly. Every factor comes in. The airplane flies slowly, a high gust of wind hitting the plane, ppl driving, (in motion) looking at the plane looks as if it is stationary and so on. Just an optical illusion. I’ve felt stupid for thinking the same thing. Honest mistake. Pretty cool how it happens though.”

“After correction: this plane is a Boeing 787-8 (test version). So it is 56.7 m long and the speed can be calculated to 400 km / h. In miles and feet: length 186 feet, estimated speed 300 mph or 260 kt
BTW this video is not about who saw the largest plane that stood in the air at the furthest but about thinking about the physical causes.”