The old term on UFO. The term came up in 1947 when American private pilot Kenneth Arnold saw a formation of nine objects fly across the Cascade Mountains in Washington state. Arnold described the movement of the objects and not his appearance when he told the press about the incident: “They would fly like a saucer if you skipped it across the water”. 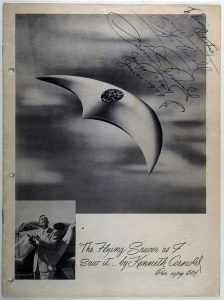 The phrase itself was coined on June 25, 1947. Often, American reporter Bill Bequette, a reporter at Pendleton East Oregonian, is singled out as the one who used the term “flying saucers” for the first time. However, this is denied by Bequette himself.

However, it was not the first time unidentified objects were compared to flying saucers. Already in January 1878, farmer John Martin in Texas described how an object compared to “a saucer” had flown over him during a hunting expedition. In this case, however, the description of the saucer was aimed at the size of the object while the shape was compared to a balloon. 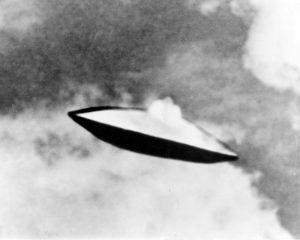 The modern term for what was previously mistakenly called flying saucer. The designation comes from the early 1950s when the US Air Force introduced the abbreviation and stands for Unidentified Flying Objects. Various American investigations and authorities have had their views on what a UFO is. The US Air Force (USAF) defined the UFO in 1966 as: “All flying objects that the observer cannot identify”.

UFO-Sweden defines the UFO in the following way: “All objects that are observed in the airspace and which cannot be identified as an unidentified object, a UFO, either directly or after an analysis by a qualified investigator, are considered unidentified objects.” In recent years, the designation has increasingly come to write in lower case letters as ufo has come to be seen more like a word than an abbreviation.