According to a study by the Journal of Applied Physics by Russian and German researchers, the Great Pyramid of Giza can produce electromagnetic energy in certain chambers of its structure.

Researchers determined that when they are hit by radio waves, these phenomena occur in three separate chambers, including the one below the pyramid.

If you are unfamiliar with the pyramid, it was ordered to be built by Pharaoh Khufu over 5,000 years ago. Much mystery revolves around this wonderful structure and many experts say it is the center of some kind of supernatural or cosmic energy. 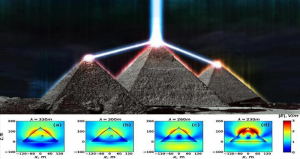 A group of researchers around the world designed a virtual Great Pyramid to study its reactions to radio waves.

The Pyramids of Giza 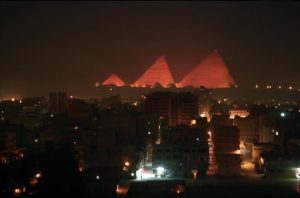 They created a multipole analysis to show how energy is focused on each specific chamber.

Finally, they concluded that the Great Pyramid can respond to several types of waves.

But as we can see, with each new investigation, another mystery and mystery arises. Maybe one day we will finally be able to discover all the secrets related to their construction, to their creators and to the goal these structures had.

Researchers are studying the famous Great Pyramid of Giza and found that it acts as a giant conductor of electromagnetic energy and believes that this will help them in the field of nano-particle research.

The Great Pyramid of Giza (also known as Pyramid of Khufu or Pyramid of Cheops) is the oldest and largest of the three pyramids of the Giza Pyramid Complex, bordering today’s Giza in Cairo, Egypt. It is the oldest of the seven wonders of the ancient world, and the only one that remains largely intact.

Based on a mark in an inner chamber with the name of the workgroup and a reference to the Fourth Dynasty Egyptian Pharaoh Khufu, some Egyptologists believe that the pyramid was thus built as a tomb during a 10- to a 20-year period that ended around 2560 BC.

Originally standing at 146.5 meters (481 feet), the Great Pyramid was the tallest artificial structure in the world for more than 3,800 years until Lincoln Cathedral was completed in 1311 AD. Originally, the large pyramid was covered by limestone houses that formed a smooth outer surface; what is seen today is the underlying core structure.

Some of the casings that once covered the structure can still be seen around the base. There have been various scientific and alternative theories on the construction techniques of the Great Pyramid. Most accepted design hypotheses are based on the idea that it was built by moving huge stones from a quarry and dragging and lifting them into place.

The Pyramids of Giza Can Focus Energy Withing Its Chambers