Dawson Church – In the part of this presentation, our guest Dawson Church discussed his remarkable examination of the role of consciousness in one’s physical well-being. 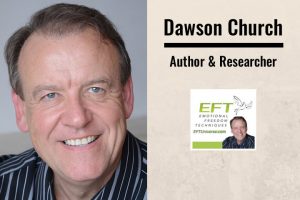 In his book Mind to Matter, Dawson cites extensive scientific research that suggests that our minds can affect our bodies and even the outside world. Emotions can be “stored” in the physical body, and over time can lead to imbalance and illness. In this conclusion, Dawson begins by addressing the idea, which is highly controversial in Western medicine, that energy is in the body and can help heal.

When I was 14, I used to consciously adapt to my own bio-rhythm to slow down my heartbeat, breathing, and metabolism when I was in the Olympic pool at school. I had the swim class the first period which meant that there was no homeroom for me so I would go half an hour early to practice this form of zen as alums swam laps in half the pool with lanes.

I discovered that by standing on the ledge at the deep end while holding a diving brick and slowing everything down into my own body, I could simply step off the ledge and float down to the bottom of the pool where I could sit and watch the divers come into the water – for over five minutes before you need to come back for fresh air! Sometimes I wandered around the bottom of the pool in a bizarre low-weight, slow motion. I could go from the deepest end to shallow with a breath! So none of this is surprising to me. I have also been in a medically induced coma that lasted for fifteen days in 2004.

While I was not present in the same room as my body at that time, I was somewhere all the time. I know this because I saw things, felt things, and most importantly I remember things from that time. Honestly, it felt like I wasn’t anywhere near the Milky Way Galaxy but it was a very nice place to be! It was not a random neuronal activity, it had a purpose. I have completely recovered from a high cord lesion that left me an almost total quadriplegic. Since then, I have become involved in leadership in our church and now have my sixth year on the board. Nothing is random. Everything has a purpose. Everything and everyone is interconnected and interdependent. – David ”

“Fascinating! Just try to imagine how much we have lost because of the nefarious derailment of the hard sciences for the last 100+ years. We would be light-years ahead of where we are now.”

Emotional Freedom Techniques (EFT) is a form of counseling based on various theories of alternative medicine including acupuncture, neuro-linguistic programming, energy medicine and TFT Field Therapy (TFT). It is best known through Gary Craig’s EFT Handbook, published in the late 1990s, and related books and workshops by various teachers. EFT and similar techniques are often discussed under the umbrella term “energy psychology”.