This sighting took place on April 3, 2019, by a man from the US city of Toccoa, Georgia.

The man saw this large dark and cigar-shaped object while driving his car on the local high road.

He pulled out his cell phone and began recording the anomaly.

He says he has never seen anything like it, it does not look like any of our crafts.

It does not look like a weather balloon either!

And we can not argue about the dirt or the line drawn on the car window, because we can see very clearly that the object is blocked by the trees from time to time. (see image below) 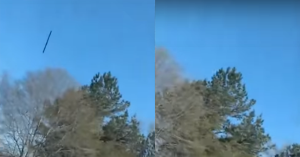 People from UFO communities have different opinions about this unidentified flying object. Watch the video and leave your opinion, maybe we can find the truth about it.

Is it a Comet? An asteroid? Or even a spaceship? Well, neither. We think. The scientists do not come closer to the truth about the mysterious Oumuamua.

The cigar-shaped space rock was discovered on the way through our solar system in 2017. For a few weeks, it was in such a position that astronomers on Earth could study it.

But now a research team, in a compilation published in the journal Nature Astronomy, announces that the studies have so far mostly come to what Oumuamua is not. At a quick glance, it could be seen as an asteroid, meteor or comet. But while all of these revolve around the sun, Oumuamua’s movement patterns – and lack of gas, dust, and ice around it – indicate that it is just passing through.

“The hypothesis of alien spaceships is a fun idea, but our analysis suggests that there are a number of natural phenomena that could explain this.”

Knight reminds us that with new tools and methods we can look all the better in space. For example, in one year, the large project LSST (Large Synoptic Survey Telescope) will be commissioned in Chile.

“Then we can start to see if Oumuamua is soft or ordinary. If we find 10-20 such items and Oumuamua still stands out, we must review our explanations. ”