Because it is a practically unexplored and forbidden place, it is not clear what is hidden inside it. Many theorists say that they may be entering a totally unknown underground world.

One of the greatest mysteries on our planet. Sarisariñama’s huge holes is presented as entrances into an unknown extraterrestrial world that has given science more questions than answers.

Experts classify them as “micro worlds on Earth.” There are huge holes found in the state of Bolivar, in the Venezuelan Amazon.

It stands out remarkably from the dense green of the jungle. Due to the little data we have about these formations, they have been there for thousands of years, giving rise to many legends and theories about their true origin or function on the planet. 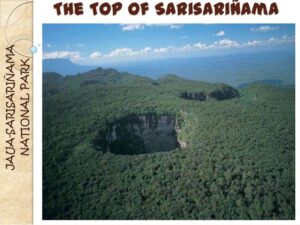 The huge holes in Sarisariñama

First observed from above in the 1960s, it had its first scientific expedition in 1974, but the results obtained in Tepuy, the plateau of the Venezuelan Great Savannah, were as surprising as they were inconclusive.

Its dimensions are 352 meters in diameter and 350 meters deep. The administrators of the Jaua-Sarisariñama National Park have decided to limit access to the enigmatic holes, allowing only researchers and scientists to enter.

However, not everyone can access them. The nearest road is hundreds of miles away, and the dense jungle and miles of rustic trails end up completely isolating them. The only way to access them is by authorized planes and flights.

In fact, many experts believe that they are “the oldest mountains on the planet” and their isolation has created unique evolutionary forms.

Sarisariñama became a much sought after destination for exploration after 1961 when pilot Harry Gibson noticed both huge sinkholes.

The Sarisariñama Summit was not reached until 1974 when a helicopter was used to lift thirty scientists to the top of the plateau.
The first investigations were made at both sinkholes, including a descent to the bottom by Sima Humboldt. A more in-depth speleological survey was conducted two years later, in 1976, by a joint Venezuelan-Polish expedition. They discovered another hole, Sima de la Lluvia.
For about two decades, it was the longest known quartzite cave (1.35 km) in the world and its exploration largely solved the mystery of the formation of these sinkholes. 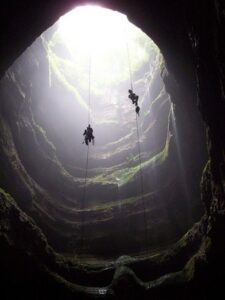 Currently, access to Sarisariñama is limited to scientific researchers.

How were they created? This is one of the unanswered questions; the walls of the holes are completely vertical, eliminating the possibility of impact or explosion.

Some experts believe that it was the collapse of the sandstone layers due to the erosion of underground rivers, but it is only a theory.

It is considered one of the most inaccessible areas in the world, so research on them is rare. However, experts say that the conditions of the Sarisariñama holes created the creation of life, animals and plants, totally unique in the world.

This means that there may be species that have been adapted exclusively to the unique conditions that exist in these ecosystems.

When Venezuelan naturalist, explorer and photographer Charles Brewer-Carías first explored Tepuy in 1974, he said the rocks were at least 1,590 million years old. In addition, it is the fifth deepest “natural” rock formation on the planet.

That is why it is considered a virgin territory, because, although little explored, it is believed that practically nothing is known about its mysteries and enigmas. In fact, scientists guarantee that conditions are ideal, with temperatures between 12 and 24 degrees Celsius, humidity and vegetation, so there are undiscovered species that live inside the holes.

Because it is practically unexplored, it is not clear what is hidden inside it. Many theorists say that they may be entering a totally unknown underground world.

In fact, they even compared it to the story of Jules Verne, Journey to the Center of the Earth, where the writer describes amphibious creatures, mammals, marsupials and totally unknown plants.

The legend told by Makiritare, the native natives of the region, tells of a huge bird-shaped creature called Dimoshi, who made a unique sound quite unusual. “This evil spirit rose above Tepui to devour people.

The enigma continues and the mysteries continue to appear. The few explorations left more questions than answers, so we know little or nothing about these giant holes. The only certainty is that it is a whole new world, with unknown creatures and vegetation.

Could it be an entrance into the underworld?