Nowadays, the number of Americans who believe in foreigners is about as much as those who believe in the existence of God. According to Diana Pasulka, this is not a coincidence.

Diana Pasulka, a professor at the University of North Carolina, claims that the belief in UFOs follows the same historical patterns of new religions. 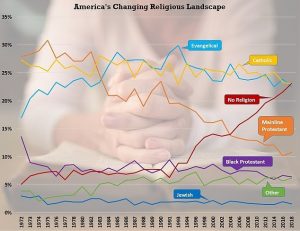 At the same time, it seems that more and more people expect foreigners to be the savior of our civilization.

Extraterrestrials reflect the birth of a new religion.

In an interview with Vox Media, Pasulka describes how the human relationship with extraterrestrials reflects the birth of a new religion.

Diana Pasulka believes that humanity is willing to embrace this new religion because space exploration plays a very important role, as does the fact that our planet is heading for a major crisis.

People are scared that we can’t defend ourselves, and the only chance we had was the help of another advanced alien race.

We will see in the future whether what Pasulka says will happen or not. What we do know is that ancient civilizations used to praise gods who were, in fact, alien races and according to many theories people have always been visited by other superior civilizations.

Meeting with a UFO religion

There are many groups around the world who have chosen to interpret the extraterrestrial side of the UFO phenomenon from a religious perspective. Ever since contact person George Adamski’s days, these groups have come and gone, some more long-lived than the others. The largest, if you look at the number of members, are groups such as the Aetherius Society and Unarius, but also a group that was initially called itself the Raëlian Movement, but which now goes by the name of the Raëlian Religion.

Ever since contact person George Adamski’s days, these groups have come and gone, some more long-lived than the others. The largest, if you look at the number of members, are groups like the Aetherius Society and Unarius, but also a group that was initially called itself the Raëlian Movement, but which now goes by the name of the Raëlian Religion.

This movement claims to have tens of thousands of members worldwide. The exact number is unknown, but various sources state that it is between 30,000 and 80,000.

The movement was founded by Claude Vorilhon (pictured), or Raël, whom he now calls himself, after having had close contact with an extraterrestrial being in an extinguished volcano in France on December 13, 1973.

Like previous religious leaders such as Muhammad and Siddharta (the founder of Buddhism), but even contemporary contacts such as Adamski, Rael felt at the time of the close contact that he was “forced” to go out into the wilderness; an unknown force gave him no other choice. There, Raël was told the true story of human origin; how we came to be as a result of alien scientists’ experiments with DNA. These aliens went by the name of Elohim, and it is these space gods that the Bible talks about when God’s work is described.

A UFO religion is any religion where the existence of extraterrestrial entities (ETs) that drive unidentified flying objects (UFOs) is an element of belief. Usually, adherents of such religions ETs believe to be interested in the welfare of humanity that is either already, or will eventually become, part of an already existing ET civilization.

Others may incorporate ETs into a more supernatural worldview where UFO residents are more akin to angels than physical aliens; this difference may be blurred within the overall subculture. These religions have their roots in the tropics of early science fiction (especially space opera) and strange fiction writing, in ufology and in the subculture of UFO sightings and alien abduction stories.