The large skull was found in Siberia and is believed to belong to an extinct wolf garden. The discovery has become world news and is now being analyzed by researchers at the Natural History Museum in Stockholm. – I was there when the head was found. Pavel brought it in a bag, says Swedish professor Love Dalén.

When archaeologists dig things from the past they are about skeletons or fossils. Still, there are exceptions like this one in particular.

In Siberia, a wolf head and a lion cub were discovered in 2018 and estimated to be 40,000 years old. And both the head and the kid were almost perfectly preserved.

Giant Wolf was revealed by Pavel EFIMOV, a local who found last summer on the banks of the Tirekhtyakh River.

The head is 40,000 years old and is a fully Pleistocene wolf. The low temperatures in Siberia allowed the wolf’s almost intact preservation.

The wolf head had thawed out of the Russian permafrost and was found in September on a riverside beach north of the city of Yakutsk. Now the news is spreading around the world – CNN, Washington Post and Daily Mail, among others, have made the discovery. At the center is the Swedish Love Dalén, 43. He is a professor of evolutionary genetics and active at the Natural History Museum.

How old was the head? 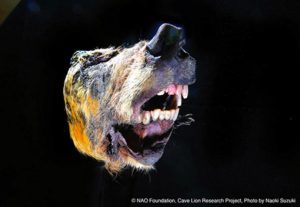 Several months later, Love Dalén and the other researchers received answers to the carbon 14 dating: The wolf head was between 30,000 and 32,000 years old – and thus a unique find. – We are pretty sure that the head belongs to an extinct variant of wolf called ice age steppe wolf. It was in Siberia at this time. Previous finds have only been bones and teeth. This in itself works great for DNA analysis but says less about what the wolf looked like. The wolf species are genetically different compared to today’s modern wolves. Studies indicate that ice-age steppe wolves were slightly larger and, above all, had strong jaws.

But it’s not a common wolf. This wolf is much larger and the head is about 40 cm long. According to investigations, it must have died when it snarled. The wolf was between two and four years old when it passed away.

Along with the giant wolf head, an entire cave of lion young has also been found. 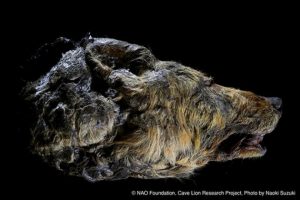 International media makes a number that the head is significantly larger than today’s wolves. Not quite true, according to Love Dalén:

– It’s something bigger, but not much. When you look at the photos we took on the wolf skull, it looks like it is longer than it really is. Some of the necks are still there and there is also a fairly large chunk of frozen clay.

The Russian newspaper Siberian Times, which first reported on the finding, writes that it is probably the ice that separated the wolf head from the body. The magazine’s readers have asked questions and wondered if it really comes from a bear or even a mythological “bear wolf”. 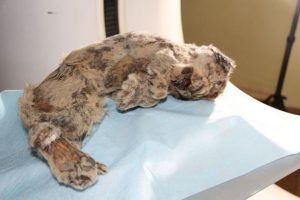 However, researcher Albert Protopopov states that is definitely a wolf.

“Maybe it’s the fur color that makes people think it’s a bear,” he told the newspaper.

It must have died shortly after birth and it is also perfectly preserved. Both discoveries can provide some insight into animals from Pleistocene.

Love Dalén adds that the yellowish color that appears in some pictures is probably discoloration from the mud where the head was found.

– But for the first time, we have an idea about the coat color. It was quite bright, not quite unlike the wolves of today. We had a theory that they might be completely white, but that doesn’t seem right.

Love Dalén and the other scientists at Natural History are currently analyzing DNA samples from the wolf skull. It is hoped that within a year or so it will have mapped the entire genus.

– There are several things we are interested in. Our goal is to try to understand when they died and if they have genetic differences compared to modern wolves, that is, what adaptations have taken place at the DNA level. 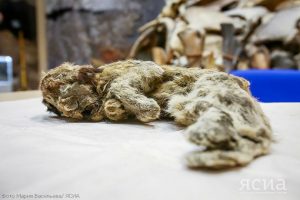 Finally, researchers hope to compare these animals with their brains with today’s example and see how they match.