If we review books on UFO casuistry or unexplained phenomena, we will find events that have the potential to “blow our brains out”.

They are so incredible and may even seem absurd, but they have been witnessed throughout human history by many people.

It is a case of that one, where a woman witnessed a group of time travelers observing the massacre of the First World War.

This incident occurred in England and was called the “Agnes Whiteland case”, which is undoubtedly one of the most intriguing incidents in the history of Ufology.

For those with a basic knowledge of ufology, this case will sound strange. After all, this is one of the most unexplained events regarding alien sightings. The event is set in England during the period of World War I (1914-1918).

Agnes Whiteland’s story begins when she looks out onto the balcony of her house. This structure was on the second floor and is from where he made the sighting of the unidentified object.

At an estimated distance of ninety meters from where she stood, she could see a platform suspended in the air. Of course, such an image was strong enough to cause the woman’s astonishment.

According to her estimates, the circular platform must be about thirty centimeters thick. While the calculated diameter for the unidentified object was about 3.5 meters.

Above her, Agnes Whitelan could glimpse the silhouettes of what she reported to be for her between eight and twelve men. All stood erect and looked toward the horizon as if trying to observe something up close.

It is possible to imagine that it was just something like a sighting platform.

However, the fact that such a massive structure did not omit the slightest noise still raises doubts. However, no matter how hard the woman tried, she was unable to recognize the cables or ropes of the mysterious structure. 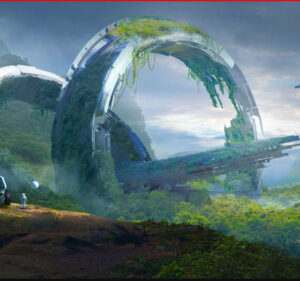 According to what Mrs. Whiteland said, all the men seemed to be in uniform. The color of their suits was blue, as were the hats they each wore.

At first glance, all the passengers on the mysterious platform gave the impression of belonging to a military corps. However, the style of the uniforms they wore did not match that of the time.

The sighting of Agnes Whiteland has been investigated numerous times by various scientists. However, none have been able to offer satisfactory answers that explain this event.

As soon as they arrived, these mysterious travelers disappeared in the same way. They just left behind a very surprised woman and a story that will live as a myth in our society forever.

For now, this story remains as a memory in the minds of family members who still live today and live with the unusual experience of that English lady named Agnes Whiteland.

Respect our content, do not copy without permission. Texts protected