Jania Kadar and her friend were cleaning up in the backyard after a gathering of friends in eastern Tallahassee when the night sky lit up.

“It was like someone turned on the stadium lights,” the Tallahassee resident said. “I look up and there is this bluish green flash. It almost looks like daylight.”

“It lasted it felt like seconds,” she said of the sighting near midnight. “The second my brain wanted me to say ‘what is that?’, it was over…” 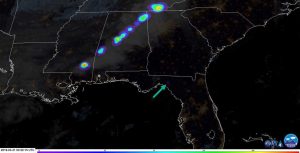 “It basically has a global lightning mapper and picks out bright cloud flashes from lightning when we have thunderstorms,” said Kelly Godsey, an NWS meteorologist.

Geminid Meteor shower stop: When to see fireballs in Florida
Even with an almost full moon, Florida’s residents can see about 30 Geminid meteors per hour, weather permitting

A meteor produced a brilliant green streak of light in the sky over northern Florida Saturday night, lighting up the region and delighting sky gazers.

The streak of light was spotted around 11:52 p.m. local time, according to satellite imagery provided by the National Weather Service in Tallahassee. A dashboard camera in Gainesville caught a glimpse of the meteor, which appeared as a bright blue-green orb of light descending rapidly toward the horizon.