Today’s NASA Fire Information for Resource Management System (FIRMS) MODIS / VIIRS map of La Palma shows even more hotspots than in recent days, a user on Twitter has discovered. The La Palma volcano — in the Canary Islands off the coast of North Africa — is a large shield volcano in the Atlantic Ocean. 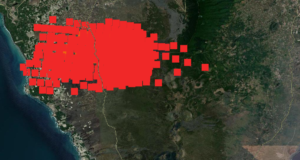 New crack volcano – 500 more have to leave their homes

The island’s last serious eruption occurred in 1971-1972, and La Palma has been studied intensively since its 1949 eruption. This is because La Palma produces some of the largest volcanic landslides on earth, which occur when part or all of the side of an active volcano collapses into itself. These landslides are extremely powerful, traveling many miles at high speed and carrying massive amounts of debris down with them.

La Palma’s Cumbre Vieja (the name for that portion of La Palma) volcano has produced major landslides several times over the last 100,000 years during eruptions that occurred 250,000 years ago, 16,000 years ago, and 7,500 years ago.

La Palma is thus categorized as a “Very High Threat” volcano by the US Geological Survey’s Volcano Hazards Program for its high level of danger to residents living on La Palma or in La Palma’s vicinity.

Vulcanologists are now studying past eruptions at La Palma to predict what might happen if La Palma were to erupt again today. It is not known whether La Palma will have another eruption within our lifetimes — but it does have the potential to cause havoc because of the massive amount of material that could be released into the ocean during an explosive eruption.

– the latest activity was reported this morning –

Volcanic eruption warning in the Canary Islands
Authorities are warning that a number of small earthquakes could cause the Teneguia volcano on the island of La Palma to erupt.

The Instituto Geográfico Nacional, the Spanish authority that monitors earthquake risks in the country, states, among other things, that 4,222 small earthquakes were measured in the Cumbre Vieja National Park, around Teneguia. The institute has set the risk of volcanic eruptions on La Palma to a yellow level, the second highest on a four-point scale.

“More intense earthquakes are expected in the next few days,” the authority said in a statement.

The last eruption of Teneguia was in 1971. Teneguia outside Morocco is one of Spain’s most active and famous volcanoes, along with Teide on Tenerife and Timanfaya on Lanzarote.

La Palma is one of the Spanish Canary Islands.

La Palma has been a nature reserve since 1954 and a National Park since 1977. In 2007 it was included as a UNESCO World Heritage Site for unique natural beauty and geological processes that have shaped its landscape over thousands of years.

La Palma is situated in the Atlantic Ocean off the west coast of Africa, about 100 km north-west from the closest point on the Moroccan mainland and 1400 km from Madrid, Spain’s capital city.

The lava flow also caused an eruption that sounded like fireworks, according to residents who live nearby to La Palma volcano. La Palma can be seen from space because it is so tall compared to other surrounding islands, which makes it visible even with modern technology.

La Palma can be seen from space because it is so tall compared to other surrounding islands, which makes it visible even with modern technology.

A local newspaper reports that a group of hikers witnessed the incident and could see an ‘enormous’ landslide take place at La Palma mountain. Only minor injuries have been reported so far, but there are concerns about larger possible damage.

6,000 people have fled from lava that has buried hundreds of homes since the eruption began on Sunday.

A local newspaper reports that a group of hikers witnessed the incident and could see an ‘enormous’ landslide take place at La Palma mountain.

(CNN) A volcano on La Palma, one of Spain’s Canary Islands, erupted for the first time in 33 years early Sunday morning. La Palma, a popular tourist destination , is home to about 81,000 people.

Residents fled from La Palma and other nearby islands as the volcanic activity continues. La Palma has been on high alert for nearly a week following increased seismic activity below its surface, Spanish newspaper El Pais reports.

The Washington Post – ” Watch this volcano erupt. It’s keeping residents who fled hundreds of miles away up at night.” La Palma

There’s an article in Spanish which is talking about the possible eruption of Cumbre Vieja volcano (La Palma) erupted in 2021. The text says, among other things: “The warning signs are there” and “we can assume that it will happen before 2031”. This information was presented by Alberto Carrasco Martínez, a researcher at the University of La Laguna. He also explained the risks involved with the Cumbre Vieja volcanic activity.