The first image of a black hole

The astronomers announced that, for the first time ever, they had captured a black hole in the picture. The historical image was taken by the Event Horizon Telescope (EHT) and can confirm what has previously only been theories.

EHT is an international network of radio telescopes that link telescopes all over the world so that together they work as a huge telescope, as large as the earth. The image shows a ring of light that surrounds a black hole in the heart of the galaxy Messier 87, a giant galaxy about 55 million light-years from Earth. 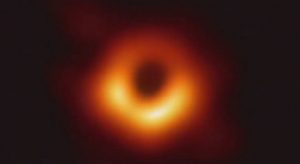 – We have seen what we did not think went to see, says Dr. Shep Doeleman, an astronomer at the Harvard-Smithsonian Center for Astrophysics.

The image has been generated in collaboration between eight terrestrial telescopes located at different locations in the world; Spain, Mexico, Chile, USA, Hawaii, and the South Pole. A project that has taken eight years to put together. When everything was ready to start, it was just waiting for the right weather. Something that was not the easiest as it was required that all telescopes had clear visibility and good weather, at the same time. The observation was made for a full week in April 2017.

The work opens the door to allow astronomers and physicists to put Einstein’s theories of gravity and general relativity to the test under the most extreme conditions of the universe.

For more information on how this amazing observation was made, see our long program “How do you see a black hole? Event Horizon Telescope on the verge of a breakthrough”

Black holes may hold the key to understanding the most basic truths in the universe, but how do you see something that is, yes, black?

Astronomers believe they have the answer. Thanks to a global array of radio telescopes that transform the earth into a giant receiver, we will soon have the first image of the event horizon for Sagittarius A *, the black hole in the center of the Milky Way.

A supermassive black hole in the middle of the Milky Way has been visualized for the first time this year.

Virtual reality, VR, can be a way to better try to understand complicated and difficult-to-understand phenomena. Researchers in Holland and Germany have now for the first time created a VR simulation of a supermassive black hole in the center of our galaxy called Sagittarius A *.

– We all have a picture in our heads of what black holes can look like, but science has evolved and we can today make much more accurate representations, and these black holes look quite different from what we are used to, says Heino Falcke, professor at Radboud University in a statement.